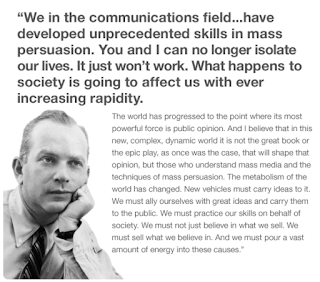 Bill Bernbach
Bill Bernbach was born in the Bronx, NY, on August 13, 1911. He graduated from New York University in 1932 where he majored in English and studied music, business administration, and philosophy.    His first job landed him in the mailroom of Schenley Distillers Company, but he didn’t stay there for long. After rising to the advertising department he left Schenley to work as a ghostwriter for Grover Whalen, then head of the 1939 World’s Fair held in New York. After the fair, he went to work at the William H. Weintraub agency where he met Paul Rand, a graphic and industrial artist whose bold simplicity had a powerful influence on him. Following a brief service in the U.S. Army during World War II, he worked with Coty Incorporated and later Grey Advertising, where he quickly rose to the top as vice-president and creative director.
Dissatisfied with the industry’s approach to advertising, Bernbach was compelled to start his own agency. On June 1, 1949, Bill Bernbach, along with Ned Doyle and Maxwell Dane, opened the doors of Doyle Dane Bernbach. They set out to prove to the world that good taste, good art, and good writing could also be good selling.
Bernbach was a visionary who valued innovation and intuition over science and rules. His philosophy was grounded in the belief that advertising is fundamentally persuasion and persuasion was not a science, but an art. By incorporating creativity, simplicity, and humor into their work, DDB created some of the most successful and memorable campaigns in advertising history. An active participant in his community, Bernbach strongly believed that people working in the communications industries were the “shapes of society” and had an obligation try to make things better in the world. This conviction was reflected throughout the work he inspired and the principles he instilled in those who worked for him. And his fundamental truths and timeless insights continue to inspire future generations to live up to the standards he set.
During the last years of his life, Bernbach struggled with leukemia. He lost the battle on October 2, 1982, and died in New York, at the age of 71.